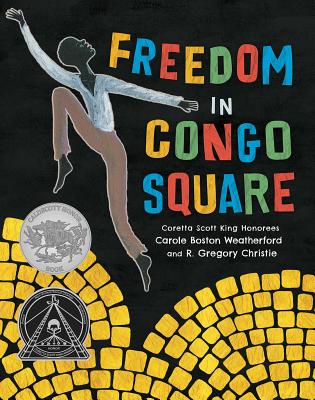 2017 Caldecott Honor 2017 Coretta Scott King Honor 2017 Charlotte Zolotow Award A 2016 New York Times Best Illustrated Book This poetic, nonfiction story about a little-known piece of African American history captures a human’s capacity to find hope and joy in difficult circumstances and demonstrates how New Orleans’ Congo Square was truly freedom’s heart. Mondays, there were hogs to slop, mules to train, and logs to chop. Slavery was no ways fair. Six more days to Congo Square. As slaves relentlessly toiled in an unjust system in 19th century Louisiana, they all counted down the days until Sunday, when at least for half a day they were briefly able to congregate in Congo Square in New Orleans. Here they were free to set up an open market, sing, dance, and play music. They were free to forget their cares, their struggles, and their oppression. This story chronicles slaves’ duties each day, from chopping logs on Mondays to baking bread on Wednesdays to plucking hens on Saturday, and builds to the freedom of Sundays and the special experience of an afternoon spent in Congo Square. This book will have a forward from Freddi Williams Evans (freddievans.com), a historian and Congo Square expert, as well as a glossary of terms with pronunciations and definitions. AWARDS: 2017 Caldecott Honor winner 2017 Coretta Scott King Honor winner for illustration A New York Times Best Illustrated Book of 2016 A Kirkus Reviews Best Book of 2016 A School Library Journal Best Book of 2016: Nonfiction Starred reviews from School Library Journal, Booklist, Kirkus Reviews, and The Horn Book Magazine